In central Dalmatia, the north-eastern warm coastal stream generates a mild climate with dry, hot summers. The water is pleasantly cool from the beginning of May till the end of September. For lying around on the beach, the Kastel Riviera and the surrounding islands are perfect. It is easy to sail between the islands, the distances are small, so in a short time you can stop by in several places for a few hours. 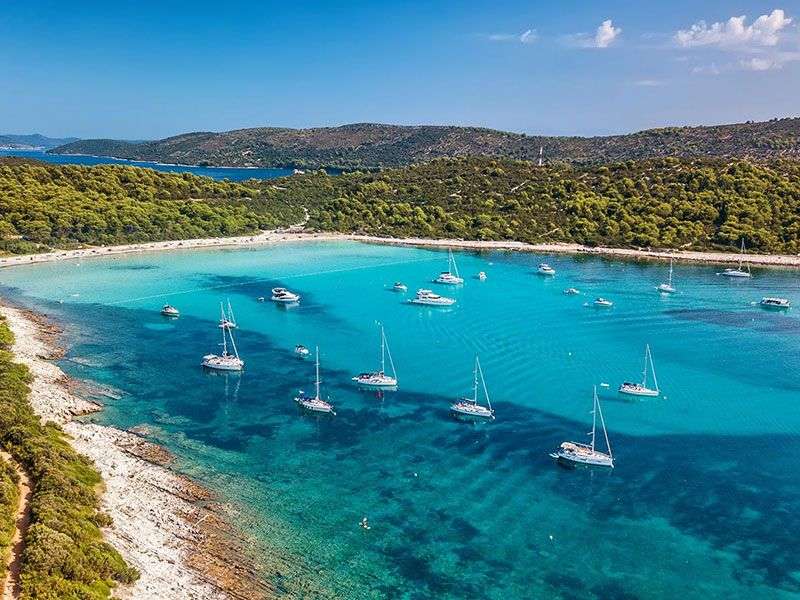 This article summarizes the following:

Beaches in Kastel Gomilicia: Dip in the water

The beaches are located along the bay of Kaštela. Each village has its own beautiful plage. The sandy beaches of Kastel Gomilica, Torac and Kamp are most favourable for families. In Stafilic, beside the Nehaj tower, there are many good places like Divulje, Resnik, Bile and Gabine. In Novi, the beaches are near to the castle; the most beautiful one is Porat. Perhaps the most beautiful coasts are probably in Kastel Kambelovac (Baletna Skola, Mala Punta, Bilajka).

Coast and bays in Kastel Gomilicia: Swimming around and a bit further away from the Kastel Bay

Central Dalmatia has a fantastic terrain for sunbathing and swimming. You can choose from the well-known Zlatni Rat beach on the island of Brac, the long coastline of the Makarska Riviera or any of the many protected bays on the surrounding islands.

The island of Hvar has the highest number of sunny hours throughout Croatia, making it the most popular destination in Central Dalmatia. In addition to Hvar, you can swim on the sandy beaches near to the Amphora and Dalmacija, but most of the tourists choose the beaches in the Pakleni islands. Close to Jelsa, there are several tongue-shaped and sandy beaches are ideal for bathing. The Zecevo and the Glavice are naturist beaches.

On the island of Brac in Supetar, the beaches can be reached on foot from the centre. The 19th-century houses around the harbour give the city a pleasant atmosphere. There are 5 gravel beaches along the coast; Vrilo is 100 meters from the centre. To the west the Vlacica, then the pine-covered Banj, then Bili Rat with a water sports centre, and finally the Vela Luka beach. Bol’s main attraction is the Zlatni Rat (Golden Horn) beach, which lies west of the town and as a huge language stretches 500 meters into the sea. It was named after its shiny white sand. The environment is breathtaking. There is a shady pine forest behind the beach and steep cliffs rising high into the air. This is one of the most beautiful regions of Dalmatia.

The beach that is suitable for swimming is 7 km east From Split. Many of the bays hide beautiful beaches. Bacvice is one of the most popular. The most famous attraction is the picgin, which is a Croatian ball game that is played in shallow water. One of the symbols of Split is the Marjan Mountains. At the foot of the mountain, there is a green oasis with many coves and stunning beaches. Such are the Bene, the Kastelet and the Jezinac beach.

At Trogir, the closest beach to the town is 4 km away, next to Hotel Medena. Although there is a coast suitable for bathing and swimming on the western side of Trogir, it is worth to visit the beaches of Drvenik Mali and Drvenik Veli. Both islands are rarely inhabited, and a dreamlike shelter from the urban crowd. At Mali olive trees are lined up, its sandy beach surrounds the Vela Rina Bay. Veli Island is abundant in bays and olive trees, and there are also some cultural sights.

In Croatia, some of the beaches are marked with a blue flag. This means the coastline’s purity of the sea, the high-quality and continuously maintained environment. The certification is regularly reviewed, providing up to date information. As a result, these beaches are under constant development and maintenance. As the majority of the coasts are gravel, it is advisable to use beach sandals. Most of the places have playgrounds, equipment rentals, especially around the islands where you should try or practice diving, but there are usually surf and tennis schools, water skiing and jet ski rentals too.

This website uses cookies to improve your experience while you navigate through the website. Out of these cookies, the cookies that are categorized as necessary are stored on your browser as they are essential for the working of basic functionalities of the website. We also use third-party cookies that help us analyze and understand how you use this website. These cookies will be stored in your browser only with your consent. You also have the option to opt-out of these cookies. But opting out of some of these cookies may have an effect on your browsing experience.
Necessary Always Enabled
Necessary cookies are absolutely essential for the website to function properly. This category only includes cookies that ensures basic functionalities and security features of the website. These cookies do not store any personal information.
Non-necessary
Any cookies that may not be particularly necessary for the website to function and is used specifically to collect user personal data via analytics, ads, other embedded contents are termed as non-necessary cookies. It is mandatory to procure user consent prior to running these cookies on your website.
SAVE & ACCEPT